“…the incidence of female family inbreeding declined, it continued to express itself prominently without, perhaps, being adequately recognized.” Leon Rasmussen

It was previously not noticed where the dam’s genotype pedigree (Vegas Showgirl NZ) revealed an extraordinary detail which is worthy of mention. (plus the fact, I am highly annoyed with myself for not to cotton on sooner!…)

Like a Renaissance oil painting it appeared only by peeling back again & again the countless layers of the generational genetic framework. Many may scoff…however genetics are perpetual life, without any end.

The foundational maternal ancestry is framework and is closest to source. It is the ‘setting’ of blood and type, waiting for its opportunity to return where/IF the developing generational breeding has detracted.

Federico Tesio ‘advised’ the planning to go deep. On his account the 9th – 12th generations back and we have to contemplate why this would be, where our contemporary breeding has joyfully revered duplication with in-breeding siring merits as best ‘success’. 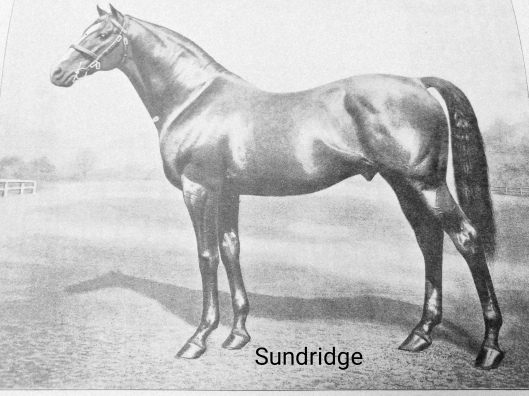 We may  begin to understand why genetic-freaks come rare for he, Sundridge was a low-fertility stallion but held in high regard.

“Sundridge’s name is synomous with brilliance, and his is the kind of professional sprinting speed that appealed on both sides of the Atlantic in the early 1900s.” credit source http://www.tbheritage.com

*Lady Josephine (dam of  “The Flying Filly” Mumtaz Mahal & world’s supreme foundation of speed) was by the sprinter SUNDRIDGE.

“Sunstar  was a courageous colt with the ability to accelerate more than once in a race and reached peak form as a three year old.” Ken McLean , Designing Speed in the Racehorse

*Stardust (Hyperion – Sister Stella, by the Cicero horse Friar Marcus from Etoile, by Sunstar “The Stardust male line dynasty has changed the face of Australasian racing, although his descendants have inexplicably sunk into oblivion in most other parts of the world” Ross du Bourg

The invisible, comes stage front: Winx (Street Cry/Vegas Showgirl) where we plea the pedigree god’s for Winx’s racing invincibility and as to why the magic-nick. View the Winx pedigree & screen placement for – Count Fleet (USA) 6Sx8Sx8dx7D, Stardust (GB) 9Xx9sx9Dx9d

Part II – is there breeding for another Winx? & what has happened thus so far ?

From my last blog Superior Performers: inferior breeders we attempted to account for the impact of 1 peculiar strain/trait which really pumps a superior performing pedigree, but for various & unknown reasons declines with other progeny or of other mating’s.

The spotlight for Vegas Showgirl progeny, Winxs siblings are…..

Boulder City, El Divino, Old Friend – all colts by Snitzel plus a filly named Courvechal being also by Snitzel. So does Snitzel’s genotype look right? Does the wonderful Snitzel (AUS) complement to assimiliate?

The traits we seek (as mentioned above) come shallow. Solario (IRE) through Silly Season, Star Kingdom (by Stardust), multiple crosses of Mumtaz Mahal however the question really begs as uncertainty: comes too indeterminate or has inconsistency upon the pedigree, takes no consistent depth or range, to one potent siring individual like for say,  Star Kingdom’s (IRE). Secondly, Snitzel is a sprinter product,  2 year old sprinting siring machine and brilliant as he is, this is clearly, not a mare for his harem.

PMNX, filly by Machiavellian. More favourable through the siring line ‘tho lesser comparable to Street Cry. The pedigree cries for more ‘strains’; the depth to be worked and identified to above.

Win Win Leader, gelding by Fastnet Rock. Disappointing here for but 1 infusion Star Kingdom. Personally, I find Danehill’s on the paternal top line  for  the rarer, superior, superior bred takes difficulty. I assume this is because of his natural sprinting makeup has transpired appropriately to successful sprinters and of sprinting racing programmes raising his profile.

From the Hyperion line, Star Kingdom’s (IRE) male descendants, why have they dearly departed? (Australian General List 27 seasons from 1951/52 through to 1977-78 , Star Kingdom, son of Stardust had 5 titles!!) This loss, is clearly lack of diversity, in action.

For my money…re, Vegas Showgirl (NZ) with her inherent traits are those Siring options which add/ project Count Fleet strains through Mr Prospector’s and Riverman →Prince John

And clearly, as many of those recovering strains as possible.

Your criteria and feedback is welcome to this blog.